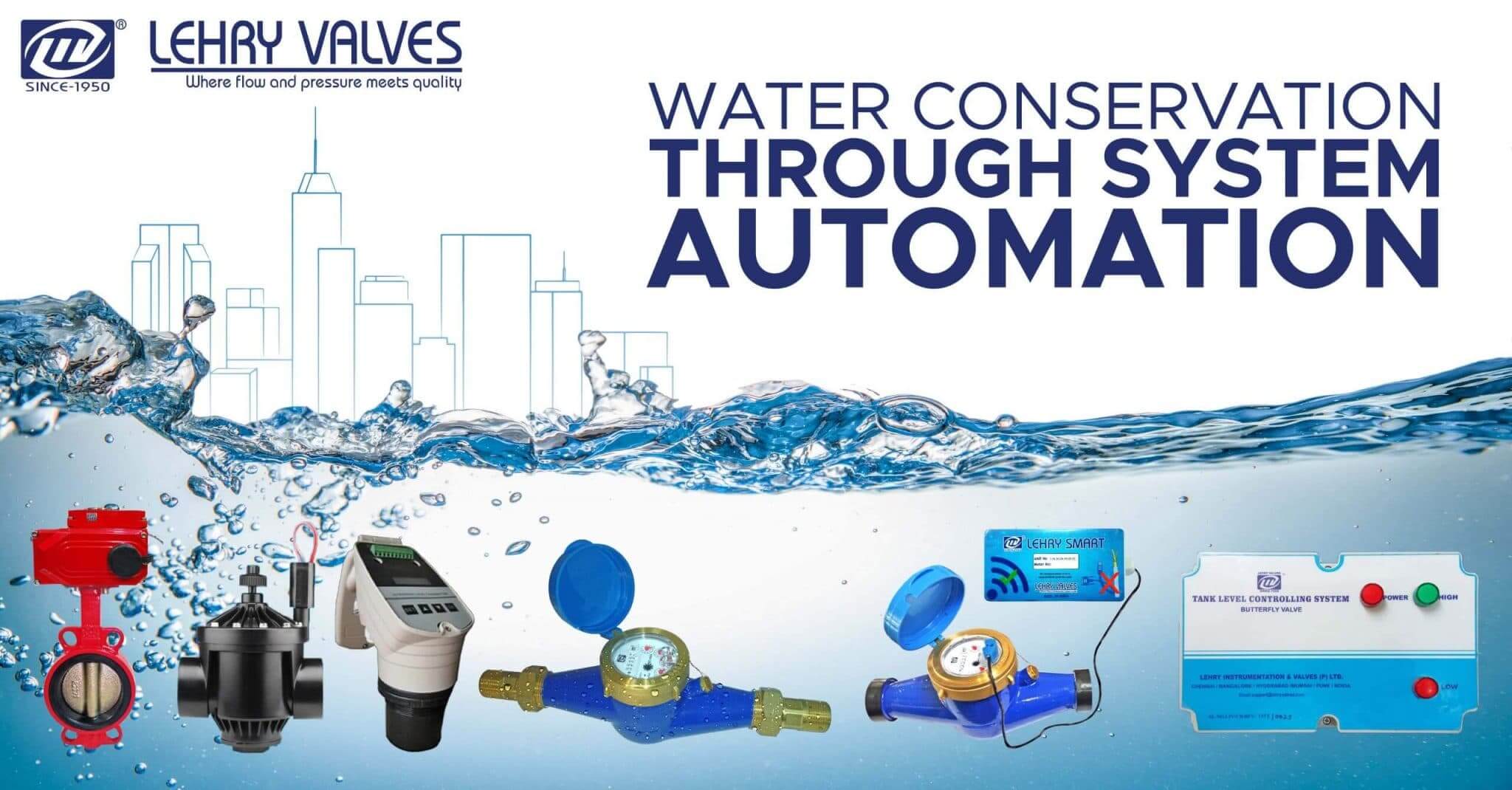 Water conservation through system automation. It is now the NEED of the hour, for us to collectively come up with a range of strategies that work in both the short term & long term in assisting us to mitigate the various threats & challenges to water scarcity and water management. And I FIRMLY believe, demand management will play that critical and central role in this very adaptation, and the proliferation of water metering systems will provide the means for utilities and the consumer to be able to better quantify demand – and this very awareness is the first step we need to take towards treating water as a precious fast depleting resource and not a mere free commodity. And this model has worked for almost every OECD country. Let’s briefly discuss the current demand Vs supply situation, blind spots in water wastage, and solutions to tackle these problems.

Water scarcity is an increasing global concern, with approximately 500 million people living in countries where a usable water supply is insufficient to support the local population. Let’s take the example of one of our very own cities – Bangalore. A study in 2018 revealed that by 2022, Bangalore would run out of groundwater, and yet this news didn’t wake the masses. Low efforts were taken towards water management whose score resulted in only a 56% efficiency as calculated by the Composite water management index. 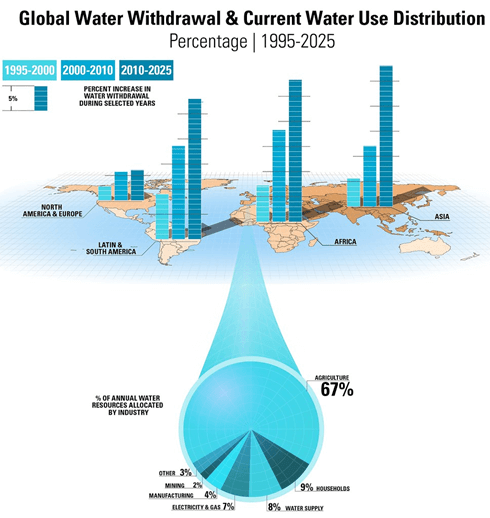 Looking at the stats gathered from the Bangalore Water Supply & Sewage board, an average person consumes roughly about 150L of water a day. This stat varies widely but the data assumed here is not skewed. So, the supply average of water from the municipal to a household average to about 65L a day (This again is the average per day supply, although supply could spread over a month with scattered supply days). Looking at this very small number, what does this actually imply? 65L of water is equivalent to 10 flushes and this is a very scary statistic especially when you consider 2 things – 1. The general population is not “water-aware” and 2. Demand – like “Human Need” is multiplying at an alarming rate and the fact that it is piggybacking on the ever-growing population rate doesn’t make this particularly great for us.

What are Blind Spots in ‘Passive’ Consumption?

When it comes to consumption, there is “Active Consumption” and there is “passive consumption”. The latter is what I would like to focus upon today. Passive consumption/passive wastage is what I refer to when water is being consumed or wasted without the user realizing it. As bizarre as this might sound, it will perhaps make sense with a quick example – Pressure! Water supply pressure plays a vital role here. When 2 people, get their water at their point of use at 2 different pressures, the amount of water consumed varies.

Let’s take a simple activity of washing hands. The person who gets water at a higher pressure of even a 0.5 bar differential than the other person, would passively consume an approx. of 6 liters of water EXTRA – meaning, 6 liters of water is being WASTED. Quite a lot for a simple activity of washing hands and this very activity’s frequency now has increased from 8.6 times a day to 14.19 times a day because of the pandemic. So, this is just one person, using ONE tap – expand this to the consumption grounds of an entire country, you NOW see how much water is being PASSIVELY wasted. Water pressure is not even being seen as an “issue” or a “factor” that could lead to water wastage – well, it very much is. 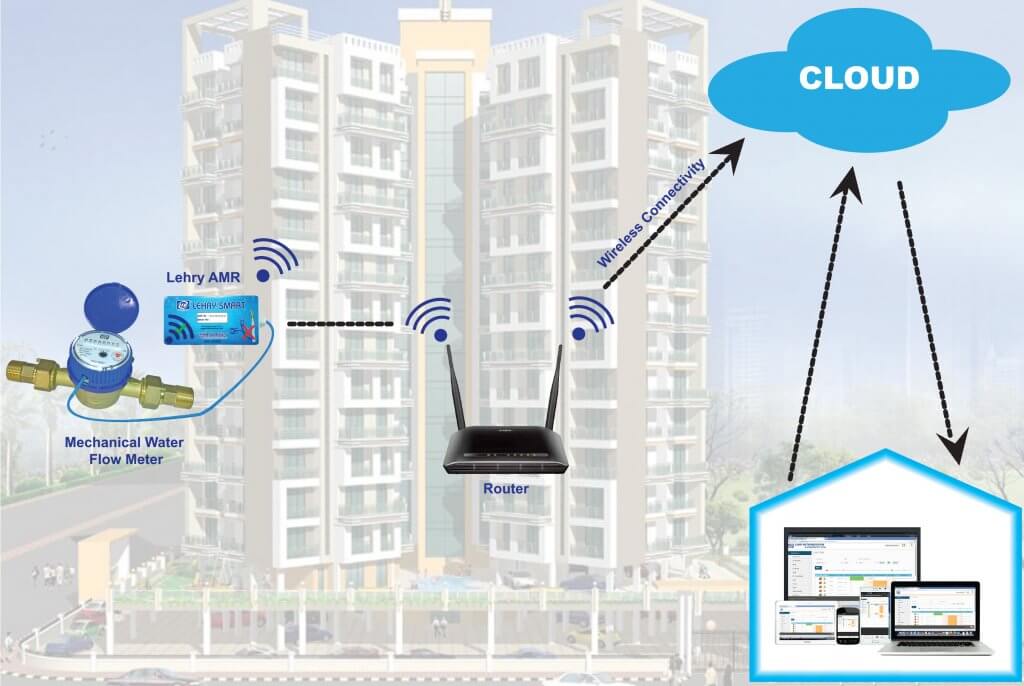 The fix – if anyone has a wild guess – it’s water management systems. We at Lehry valves conducted an experiment to directly correlate the effectiveness of water metering with respect to water consumption over a period of 3 years across multiple projects in Chennai, and the results were indeed astonishing. We used our smart water meters that are Wi-fi enabled and require virtually no wiring, we installed them on every inlet going into an apartment monitoring data remotely with transmission frequencies occurring every 2 mins, so as to give in-depth analytics on water consumption patterns and consumption behaviors.

With no hidden factor involved, we noticed an average of 30% dip in consumption merely 10 months into the implementation of the system. Without a doubt, I can say, using a metered system is the best practice to move thinking of water from being a free commodity to a consciously used resource.

This kind of response was recorded not just within this city, but every country under the Organization for Economic Cooperation and Development who implemented a water management solution fetched mind-blowing positive results in rather short spans of time. To consider examples, let’s talk about what France and Germany did? Steps were taken by them to install a water meter in every household – even single-family homes covering a staggering 90% of occupied homes nationwide. What was observed? In a period of just 12 months, they observed a total reduction in water consumption by 10% NATIONWIDE. so, when speaking in terms of millions of millions of liters of water, 10% saving is phenomenally high.

This brings me to my final point on this subject – change in trends. The need for water metering really does have to change. So far, a need has been created only when there are conflicts in billing or disputes between Owners in an association/ a gated community, there has not really been an “awareness” to people outside of this field. Even builders, market the availability of this system in their projects as an “add-on” to their smart building systems but don’t really educate the people as to why it is really being put there.

There has to be an increase in management autonomy for water utilities on a larger scale. Builders and the government have to move from being a mere provider toward being a regulator of water services. Although this trend is more likely to be accompanied by an increase in the private sector, it’s still a start as the vast geography of the country would make it hard for a nationwide metering system.

When you think about tank automation, there are multiple solutions available. The only predicament many integrators used to have was the running of long wires from the tank to the pump, which had heavy cost implications, tedious troubleshooting, and maintenance. Thanks to technological advances, we were able to come up with a solution of providing seamless independent operation of the tank and the pumps (in the case of conventional transfer pumps). Bu using a motorized valve at the tank level to open/close depending on tank level, overflow or an empty tank is something you don’t ever have to worry about. Using pressure-based principles in the supply line, a provision of a pressure zone & a PLC panel integrated with the pump, we can accordingly automate the pump to either switch on or switch off automatically based on tank levels. Quite a simple system, with excellent ROI and most importantly, up to 15% average water savings. 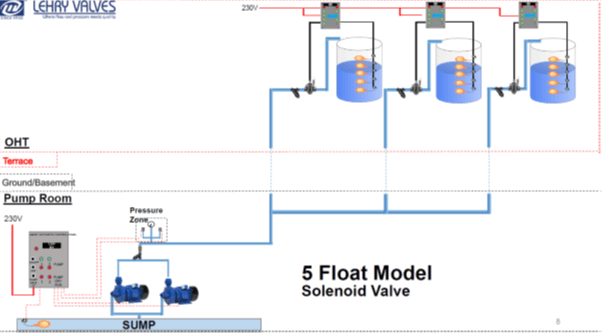 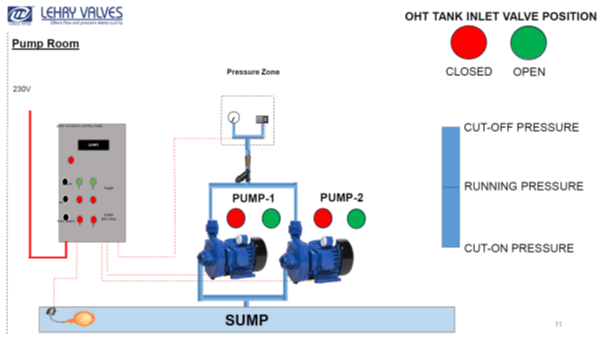 In conclusion, a water management system is the way to go. They hold multiple benefits and most importantly, they are able to provide in-dept data to both utility team and the consumer itself. There have been many studies conducted that PROVE human consumption behavior DOES indeed change with the proper representation of data AND proper means of education.